I will put this notice on my post from now on, every time that I copy a post from Facebook, so all of my readers will know that this is not my work, but that of someone else. This, like so many of my posts have, came from Facebook.

We’ve all read the signs of a heart attack listed on posters in the hospital waiting room. But what if there were other, earlier signs that could alert you ahead of time that your heart was in trouble?

It turns out there are. Researchers have done a lot of work in recent years looking at the signs and symptoms patients experienced in the months or even years leading up to a heart attack. “The heart, together with the arteries that feed it, is one big muscle, and when it starts to fail the symptoms can show up in many parts of the body,” says cardiologist Jonathan Goldstein of Saint Michael’s Medical Center in Newark, New Jersey. Here are seven surprising clues that your heart needs a check. Any of these signs — and particularly two or more together — should send you to the doctor for tests.

Sexual problems
Something cardiologists know but the average guy doesn’t: Erectile dysfunction (ED) is one of the best early tip-offs to progressive heart disease. “Today, any patient who comes in with ED should be considered a cardiovascular patient until proven otherwise,” says Goldstein. In women, reduced blood flow to the genital area can impede arousal, make it harder to reach orgasm, or make orgasms less satisfying.

Scary stat: Researchers at the Mayo clinic followed men ages 40-49 with erectile dysfunction and found they were twice as likely to develop heart disease as those with no sexual health problems. Another study looked backward and found that two out of three men being treated for cardiovascular disease had suffered from erectile dysfunction, often for years, before they were diagnosed with heart trouble.

Why it happens: Narrowing and hardening of the arteries restricts blood flow to the penis, which can give men trouble when it comes to getting or keeping an erection. And because those arteries are smaller than the ones leading to the heart, erectile dysfunction can occur before any other sign of artery stiffness. Lack of oxygen can also lead to ongoing fatigue and weakness, which can sabotage libido, so lack of desire may accompany lack of success.

What to do: If you or your partner has difficulty getting or maintaining an erection or has problems with sexual satisfaction, that’s reason enough to visit your doctor to investigate cardiovascular disease as an underlying cause. Get a full workup to assess possible causes of erectile dysfunction or difficulty with orgasm. (Guys, see your GP, not just a urologist; gals, don’t just see an ob/gyn.) If your doctor doesn’t mention heart tests, request them. 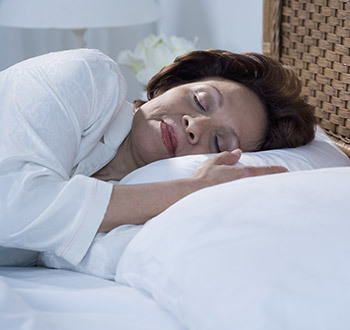 Snoring, Sleep Apnea, and Other Breathing Problems During Sleep

If you snore loudly enough to keep your sleeping partner awake or to force him or her to resort to earplugs, your heart may be at risk as well. Restricted breathing during sleep — the underlying cause of snoring — is linked with all types of cardiovascular disease. Sleep apnea, in which breathing briefly stops during sleep, is linked with a higher risk of both cardiovascular disease and heart attack.

Scary stat: Those with sleep apnea were found to have three times the normal risk of having a heart attack within five years.

Why it happens: Sleep-disordered breathing, which includes sleep apnea and a lesser condition known as UARS, lowers the blood oxygen that feeds the heart. Obstructive sleep apnea is thought to damage the right side of the heart, which has to pump harder to support the lungs, which are strained by trying to overcome the airway obstruction.

What to do: Any sleep-related breathing problem is a clue that something’s wrong, so call the doctor. She may recommend a sleep study, but get your heart checked out too. 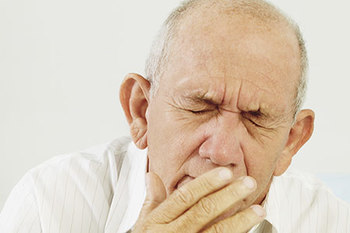 Sore, swollen, or bleeding gums are symptoms not only of periodontal disease — in which exposure to bacteria causes the gums to become inflamed and pull away from the teeth — but also a possible early sign of underlying cardiovascular disease.

Scary stat: A 2010 study by the American Academy of Periodontology (AAP) estimated that the prevalence of periodontal disease may be underestimated by as much as 50 percent.

Why it happens: Experts believe that poor circulation due to heart disease could be an underlying cause of periodontal disease. Researchers are also studying whether a common bacteria is involved in both gum disease and plaque buildup inside coronary arteries. The link may also have something to do with the body’s response to prolonged inflammation.

What to do: See a dentist to treat gum disease and prevent the presence of bacteria. Because gum disease can be a red flag for inflammation and circulatory problems, ask your doctor if ongoing gum symptoms warrant a checkup. 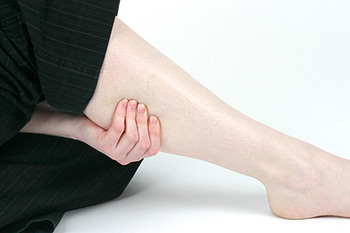 Puffy or Swollen Legs or Feet

If you notice that your feet swell enough to make your shoes tight; your ankles, wrists, or fingers are noticeably puffy; or there are deep pressure marks or indents when you take off socks or hose, you may have a problem with fluid retention. Also called edema, fluid retention can be a sign of coronary artery disease (CAD), heart failure, and other forms of cardiovascular disease.

Scary stat: More than 80 million people have one or more forms of cardiovascular disease, and approximately 900,000 people die from it each year.

Why it happens: Fluid retention occurs when the heart doesn’t pump strongly enough and blood doesn’t carry waste products away from tissues. Edema usually starts in the feet, ankles, fingers, hands, and legs because they’re furthest from the heart, where circulation is poorer.

What to do: Report problems with edema to your doctor, who can run tests that may indicate CAD and can determine if your heart function is normal. 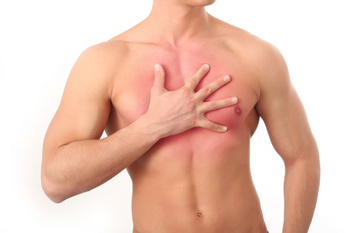 An early sign that something in the cardiovascular system is out of whack is irregular heartbeat, or arrhythmia. It may feel like your heart is skipping beats, beating too fast, or pounding too hard.

Scary stat: Coronary artery disease (CAD) is the leading cause of sudden death for both men and women because it can lead to both heart attack and stroke.

Why it happens: The most common cause of irregular heartbeat is CAD, which restricts blood flow to the heart, straining the electrical system that keeps the heartbeat regular and coordinates it with other functions. Heart failure can also cause arrhythmias because the weakened heart overcompensates by beating harder and faster.

What to do: An EKG can measure the electrical activity of your heart, including the regularity of the heartbeat. A stress test, which measures your heart rate while you walk on a treadmill, can determine if your heart is pumping properly. 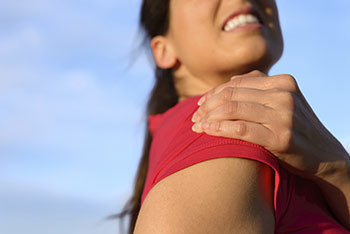 Constriction or Aching in the Chest or Shoulder

The most common symptom of coronary artery disease (CAD) is angina, a type of chest pain. Angina (officially called angina pectoris) is different from the sharp clutching pain of a heart attack; it’s likely to feel like a deep ache or a constriction or weight on the chest, and it may worsen when you draw in a breath. One of the reasons angina is often missed is that it feels different to different people; to some it’s more of a heaviness, fullness, or pressure rather than pain. It can also be mistaken for indigestion or heartburn when the pain occurs lower down in the abdominal area. The tightness, constriction, or pain may also occur in the shoulder, neck, jaw, arm, or upper back, where it may be mistaken for a pulled muscle.

A tip-off to angina versus a pulled muscle or gastrointestinal problem is that you’re likely to experience the problem repeatedly rather than to have one isolated or prolonged episode.

Scary stat: According to the National Heart, Lung, and Blood Institute, 17 million people are living with angina. Cases of angina are divided almost equally between men and women, with men being slightly more at risk.

Why it happens: When plaque builds up in the coronary arteries, it deprives the heart muscle of blood, making it feel squeezed. Most people with stable angina find that episodes are most often triggered by anything that puts an additional strain on the heart, such as exercise or stress.

What to do: If you’re diagnosed with angina, your doctor will recommend resting when episodes occur; or she may prescribe nitroglycerin, which relaxes the coronary arteries and other blood vessels, increasing blood supply to the heart and easing its workload. 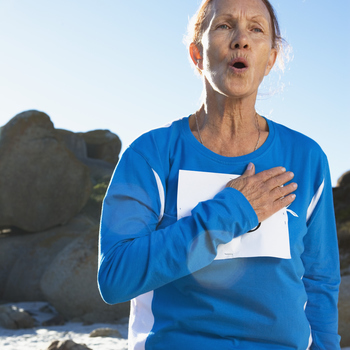 An early sign that something is wrong with a major bodily system is shortness of breath, typically with exercise, exertion, and stress. (Typically, shortness of breath indicates either early-stage heart disease or early-stage lung disease, and it’s not possible to know which it is without seeing a doctor.) It may feel like you can’t catch your breath, or you may notice a feeling of compression in the chest and lungs, making it difficult to take a deep breath. Another breathing symptom of poor circulation may be labored breathing, which occurs when fluid accumulates in the lungs. If you notice that your breathing problems are worse at night or anytime you lie down, that can also indicate a heart problem.

Scary stat: In a landmark study by the National Institutes of Health (NIH) published in Circulation: Journal of the American Heart Institute, 95 percent of women who’d had heart attacks reported experiencing unusual symptoms in the weeks and months before the attack, and 40 percent reported shortness of breath.

Why it happens: When your heart isn’t pumping strongly enough, less oxygen circulates in your blood. The result is shortness of breath; you might feel like you do at high altitude or when you’ve run for the bus, unable to draw enough oxygen into your lungs.

What to do: Shortness of breath, either with exercise and stress or all the time, is always a reason to see the doctor for a checkup, since it can be a symptom of a number of serious conditions.