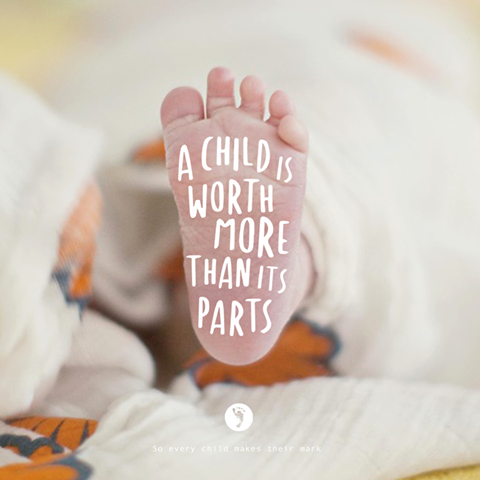 In an age where the bodies of our preborn are being reduced to a commodity, we must encourage those around us to think harder, question more, and stand up to the abortion giant. Our children are worth far more than the “parts” to which they are reduced.

AMEN to that!!  As I do not know if this statement is indeed a true fact, what I am writing here is only what I think could happen. If the bodies of our preborn are being reduced to a commodity, is indeed a true fact, then men and women that know that aborted babies are being sold whole or piece by piece, may start getting pregnant more, just so that they can have an abortion.  By doing this, they might figure that they could work out a deal with “the baby parts sellers to get in on a cut of it if they provide the babies. It’s a poor state of affairs when preborn babies may be being sold for baby parts.

I cannot imagine a nation stooping that low. Life is precious. Nobody should be allowed to take the life away from the unborn for money or any other reason.

There are too many childless couples out there that would love to be able to adopt and love an unwanted child.  Just because one person thinks that children are a bother and do not want them, doesn’t mean that the child is not wanted period, and should be thrown away like garbage.

There would be a lot less childless couples if there were less abortions and more adoptions. This is a solid fact, not just a thought. Don’t abort! Let someone that is unable to bare children but wants children adopt your obviously unwanted child. Any child that is adopted is obviously a wanted child. After all, the couple paid money to be able to love that child and call the child their own.

If you are dead set on having an abortion, just think about one question for a minute, “Where would you be if your Mother had have decided to abort you?” One thing’s for sure, you wouldn’t be getting ready to murder an innocent baby, that has not even had a chance to enjoy anything. That baby, that you are getting ready to kill, can suck it’s thumb, kick, smile, hear your voice, and react to an outside stimulus. Yet you can call the baby a fetus, and refer to it as just tissue. You must be some kind of a monster.

I had endometriosis and was unable to carry a baby full term. Within a week or two of finding out that I was expecting, I lost three babies. I would have been ecstatic if I could have adopted an unwanted child. Unwanted children need a lot of love, and I felt that I had a lot of love to give. Unfortunately, neither one of my two husbands wanted to adopt, so I was left without any children.

Lets start ADOPTING babies rather than ABORTING them .. SHARE if you AGREE!

This was also on Facebook. I shared it as soon as I saw it, and I am sharing it again here.

I hope that you will take the above information to heart if you ever think about aborting a baby. There are so many people out there that would love to adopt that unwanted child that you are getting ready to kill. Give the baby a chance at life, and to be dearly loved.